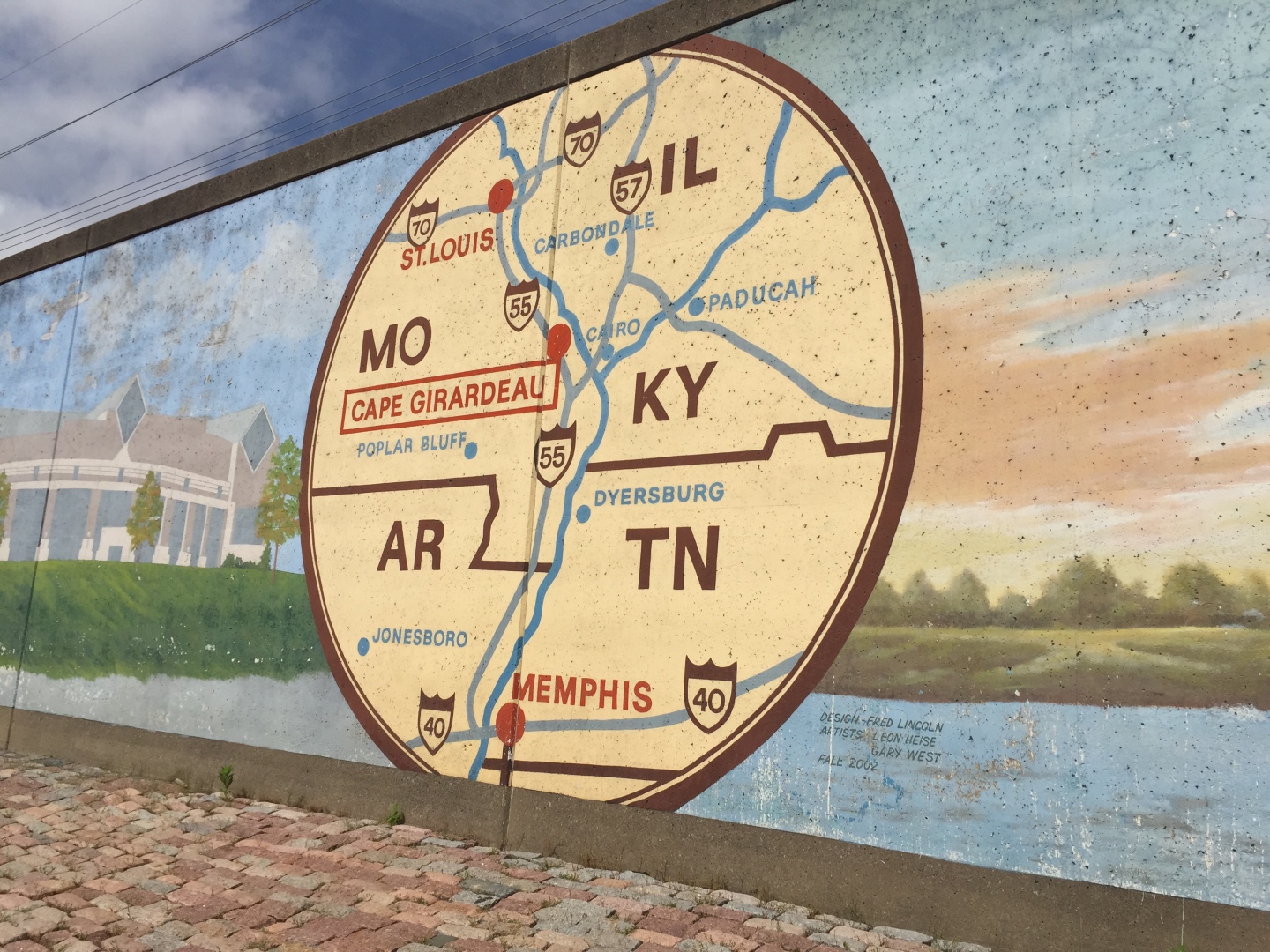 Right now I’m in a Quality Inn outside of Cairo, IL. There are no restaurants nearby, so we ate (choked down) some frozen “Hungry Man” dinners from the Dollar General. I stuffed myself with many oreos, and I drank two orange sodas, because apparently I love Fanta. This is the glamour of life on the road.

It strikes me that bike tour blogging is full of quite a few problems. Turns out riding a tandem bicycle hundreds of miles is pretty difficult. And there are countless things that can go wrong. 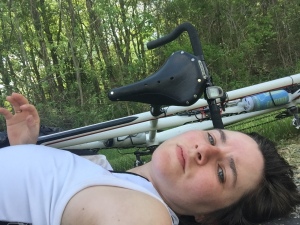 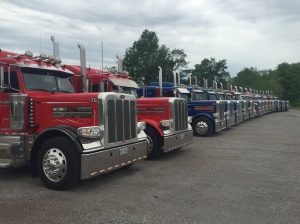 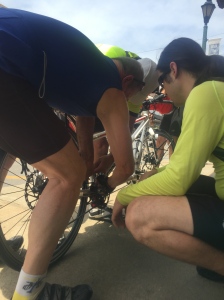 Yes, that is four grown men working on one bike. Our bicycle hasn’t been shifting well. That can be a problem for hill-climbing among other things. So, at our stop in Cape Girardeau, a lovely little river town, we decided to try some handiwork. Now, remember, neither on of us knows much about bike maintenance. But, with some instruction from a bike mechanic back home my dad has been having some mild success in self bike care.

We biked into town around 10:30am after 38 miles in beautiful rolling countryside. I literally started singing “America the Beautiful” in my head at one point looking out over the fields of grain and small rural churches.

We immediately went down to the riverfront to take in the site of the massive Mississippi. 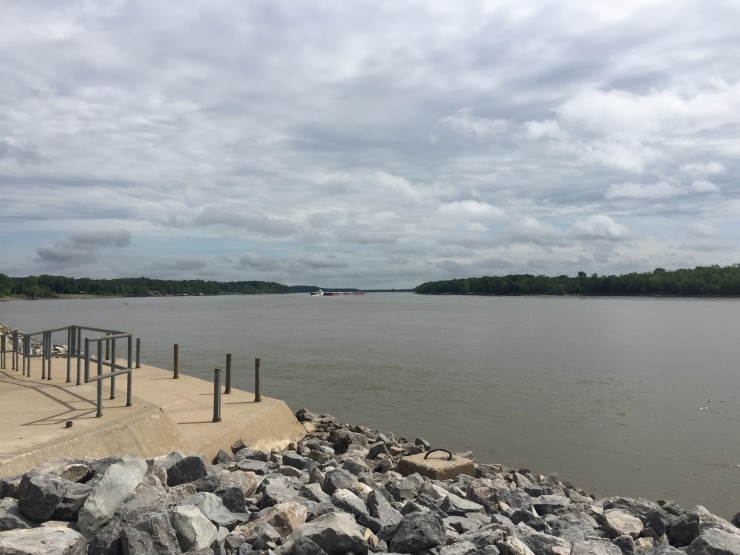 For context of where we are in the world, see this nice mural:

Anyway… we get to the river and my dad starts messing with the derailleur. No change. Defeated, we go eat some lunch and refuel. We then go out to the road and are just going to live with it when some cyclists roll by. Before long we had a full troop of problem-solvers on it. Unfortunately… everything only seemed to get worse. After 30-45 minutes of messing with it, my dad and I decided to call it. We would stay the night in “Cape” as the locals call it, get to a bike shop in the morning when it opened, and then be on our way. But, one of our helpers, Greg, insisted that we take his cell phone number. He had a few more ideas up his sleeve and was willing to go home and get some tools to bring back. After the two inns in town were both full and after consulting big brother Ben, who knows everything, we decided to call back in Greg. We waited by the memorial for the Confederate States of America for Greg to arrive. Don’t worry, there was also a memorial to the union soldiers. Missouri is an interesting place. 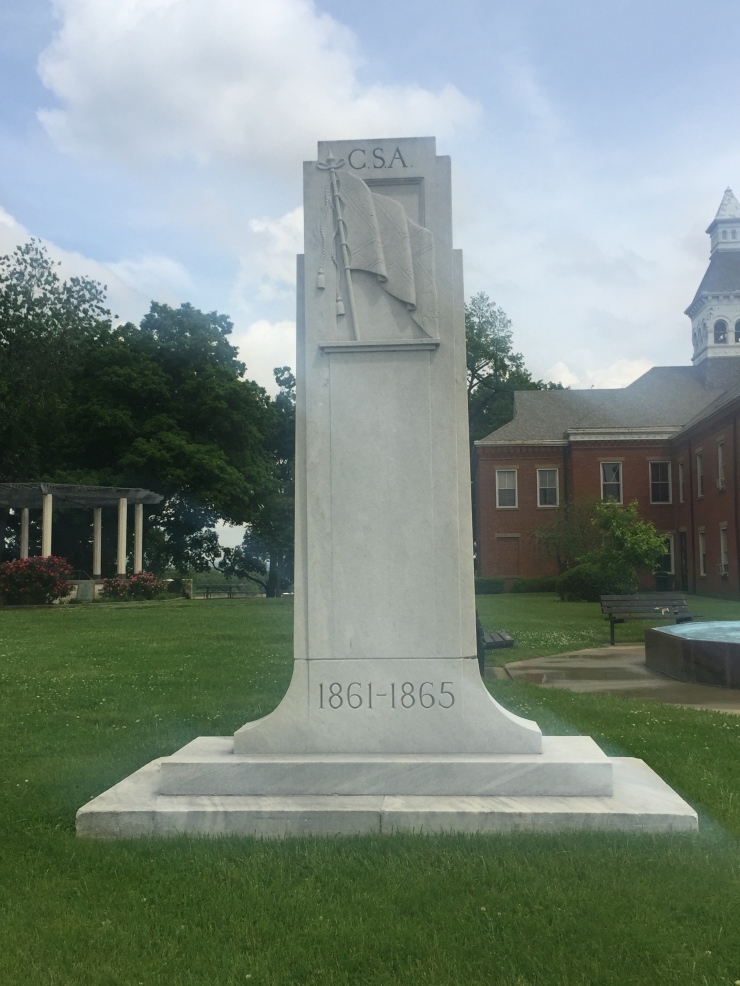 Greg eventually arrived and got right to work. He is one of those guys that will not stop until he has figured it out. His first solution did not work, and again, my dad and I were ready to call it quits. But not Greg. Greg was unscrewing a panel on the handlebar to get into the gear shifter. His persistence got to the root cause—the cable had come unhooked from the shifter! We then spent the next 15 minutes fishing it out, tightening cables, adjusting nobs, duct-taping frayed ends. Greg by our side the whole time. By 3:30 we had a functioning bike and could be on our way.

So, yes, we have encountered lots of problems on the road. We are not loving every minute of our ride. But, just when it seems the problems are winning, that random act of kindness from a stranger swoops in, shakes you up, and makes you realize just how amazing this world can be.

The next thirty miles were tough. Balmy. Impending storm. Late afternoon fatigue. But, we turned on our leg machines and just pedaled. And kept pedaling. Back across the Mississippi, down the country roads of Southern Illinois, to our cozy little home at the Quality Inn.

To keep track of where we are, I’m doing a better job updating our map as we go here.