After just over 24 hours in the St. Louis region, I have learned a lot. But, I write this post knowing that there is lots I did not learn. That there were many people I did not meet. That I am an outsider, who was there for a day, and therefore any reflections I write must be read with that lens. Still, here are my reflections.

We arrived in St. Louis after nearly 400 miles of biking in 5 days. We were tired and sunburned, but we had no time to waste. Our first stop was Mike’s Bikes STL where we dropped off our bike for a tune-up (we were having some shifting problems—less than ideal when trying to outpace a dog). Next stop was our hotel where we washed up before going out to dinner with local civil rights attorney, Steve Ryals, and his wife Karen. 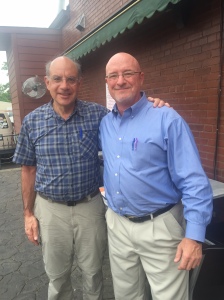 They took us to their favorite Italian restaurant on “the Hill.” The pasta and red sauce were perfection, though the intense love I had for the food may have been enhanced by the previous four dinners lackluster performances. Indiana and Illinois exclusively featured buffets and Applebees. Over dinner we began to get our bearings. Steve, a middle-aged white man, grew up in Ferguson, went to the public schools there, and raised his kids there. He met his wife, from nearby Florissant, in high school, and they have lived in the St. Louis region for nearly their entire lives. He shared with us the complicated history, the tendency of white families to just move when new people arrived or tensions arose. This “just move” idea is one we heard a lot. We bonded over dinner as we discussed the value of growing up in a diverse neighborhood, something my parents had as a top priority for my brothers and I.

While yesterday morning was the first morning in days we didn’t wake up and put on spandex, we were up early. The ACLU of Missouri arranged a full day of meetings for my dad and I with people interested in learning about the Cincinnati model. Prior to our visit, my dad had many conversations with attorneys in the region interested in the Cincinnati Collaborative, an effort in 2001 to reform police-community relations. My dad was a key leader in that work. Many involved in the Cincinnati process (including two of my dad’s clients that have already gone to Ferguson to be of aid once) are ready and open to supporting St. Louis and Ferguson however we can. Still, my dad and I were cautious as we entered this day. We wanted to be helpful, but not imposing. Throughout the day I was struck by just how welcomed we were. The thing is police reform is hard work. And it can feel impossible. Michael Brown was killed, and that was horrible. That is horrible. That will never be ok. 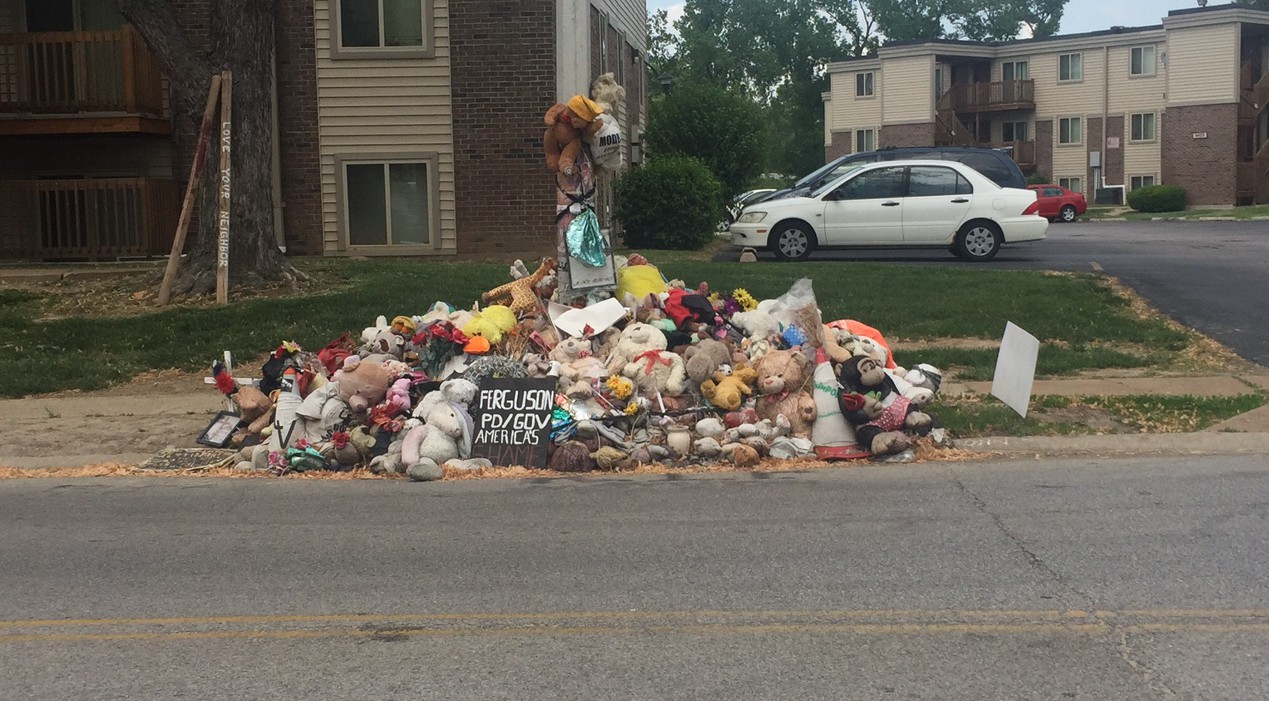 Protestors have filled the streets countless times to demand fairness and respect. Many had their rights trampled. Neighbors and stakeholders have met to discuss their feelings and potential paths forward. The Department of Justice has investigated. The world has been watching. But, now, when the world is watching Baltimore, Ferguson and the greater St. Louis region are really starting to get to work on the more long-term sustained change. Reform often begins from outrage and is fueled by outrage. Anger is necessary. Lasting reform channels that outrage into lawsuits, policy recommendations, and systems of citizen accountability. That stuff is less exciting for the media. But it is in this moment, when the many leaders and activists of Ferguson and St. Louis are working to shift power, that stories from other cities can be most useful. At the end of our final meeting with ONE Ferguson, a group of Ferguson citizens that want to help create a more unified Ferguson, one member remarked, “hearing about Cincinnati’s process gives me hope. Knowing it is possible to get to the other side.”

But, let’s back up a little. In a day where we met 31 different people from the St. Louis region there were certain things I learned. First, I learned that there are a lot of strong, committed people, many volunteers, ready to do the work to ensure that Black Lives Matter in their communities. Second, I learned that the St. Louis region is complicated. There are 91 municipalities in St. Louis county, not including St. Louis city, which is separate. This came up a lot when thinking about how a Cincinnati Collaborative process could be translated to this region. People want change for Ferguson, but also for St. Louis and Jennings and Berkeley and Moline. Thus, while there is a need for local solutions, there also needs to be a regional strategy. Not only is St. Louis geographically complicated, but we also heard about the racism. As one person we spoke with put it, “there is something different about the racism here. It’s palpable. It’s a unique flavor that smothers everything, but it’s never quite visible.”  Repeatedly people remarked how the white people will just leave and “move to St. Charles” when things get bad. But, it was clear the “just move” strategy was not available to most.

So, what did we do? We began the day meeting with representatives from the Ferguson Commission, the group appointed by the governor to investigate the root causes of the issues in the St. Louis Region. They have a big task and a very competent managing director, a native of St. Louis with a lot of experience bringing diverse stakeholders together. But, the commission is set to sunset on Dec. 31, and the governor has not set up funding for implementation of the “calls to action” they are creating. We then met at the ACLU with representatives from various regional organizing and legal groups who participate in the Don’t Shoot Coalition. I was impressed by just how many people came out. This is not a community where people don’t care. We met leaders from the NAACP, the Organization for Black Struggle,  Metropolitan Congregations United, ONE Ferguson, and more. Anyone that has worked in nonprofits and community organizations knows how difficult it can be to bring a diverse group of leaders to a table. While each organization has it’s own priorities, as they should, they all were unified in their conviction to see reform through. In Ferguson, we met with ONE Ferguson, mentioned above. Again, a lot of people were there, including a city council member. This group was all Ferguson residents. In each of these meetings we listened. In each of these meetings we shared Cincinnati’s process—successes and failures. While one day is not enough, we are hopeful that we were helpful in the ways we could be. Many asked to follow-up, thus, while we were there for one day, the conversation is on-going.

One group notably absent from the meetings we had were young people. Of course I noticed this given my line of work, but it was also something mentioned by everyone we met. Everyone wants to have youth more engaged in the reform processes, but there seems to be a divide. The lack of meaningful youth involvement in the Cincinnati Collaborative is one of the things my dad will readily admit as a shortcoming. In fact, as a 14-year-old I was one of the youth involved in the process. I met with other youth and we discussed issues with the police. But, reflecting on it now… it probably shouldn’t have been me at the table. I had never been harassed by the police. I had never gotten in trouble. While there were plenty of police in my mixed-race neighborhood, they were not talking to me. Sure, I had a consciousness about racial justice and civil rights, and I know I helped synthesize ideas in the dialogues I participated in, but, yea—it probably should not have been me. Thinking about Ferguson and the St. Louis region, it will be critical for all of these well-intentioned, smart, passionate adults to find avenues for youth to participate. Or rather, more than participate—to lead.  Youth should not just be tokens at meetings. Or one-off speakers at town halls. And the youth that lead should not just be the mild-mannered, well-spoken, well-tailored youth.

Young people were at the forefront of the protests and they can be at the forefront of sustained reform if given the platform, skills, and space to take their experiences and transform them into calls to action. I have witnessed this time and again in my work at Mikva Challenge where youth were given summer jobs (and actually paid) as youth policy makers and in my work in Michigan. I also know it is hard work, and there is so much hard work to be done. But, we pay for it later when we don’t engage youth now.

This morning as we rode away (in the pouring rain), I felt an overwhelming gratitude to the people we met for welcoming us into their spaces and processes. These are hard times for many American cities. It is easy to ignore and hide. It is much harder to engage. Everyone we met is engaging and it was a privilege to engage with them. Again, I recognize, we had one day on the ground. This is their everyday. I carry their struggle with me as I ride. I carry Michael Brown, John Crawford III, Tamir Rice, Walter Scott, Freddie Gray, and dreadfully so many more as I ride. I carry hope, also. Because people are waking up. People are working hard. And without hope, we are all lost.